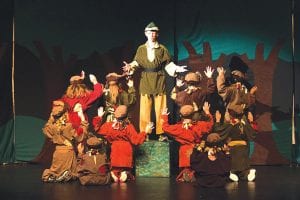 Former Iroquois Student Carly Weldy will work directing and performing for a children’s traveling theater for the next year.

<p dir=”ltr”>Seated on the Mill Road Overlook in East Aurora, Carly Weldy tries to capture what she loves most about kids.

<p dir=”ltr”><span>She recently accepted a position at the Missoula Children’s Theater, a company that sends recently graduated students from around the country to perform and direct children’s theater. Weldy will be gone for a year, travelling around the United States to pursue her passion, but before the whirlwind she’s here watching the sunset at the nature preserve, contemplating her answer.</span>

<p dir=”ltr”><span>“They’re just sponges,” she says. “They feed off of your energy. I’m a kid at heart, I mean, do I dream about my child’s playground for my own sake? Yes,” she laughs.</span>

<p dir=”ltr”><span>“How cliche it is, but they’re the future. People need to establish morals and communication skills early and they’re just so innocent. They don’t know bad yet, they only see good and maybe it’s naive to say that, but… they’re too pure for this world.”</span> 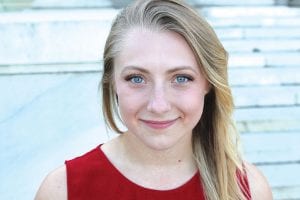 <p dir=”ltr”><span>The new job is a position at the Missoula Children’s Theater Company, touring the country as an actor for the largest company internationally of its kind. <span>Weldy gets a Ford F-150 full of costumes and a set for Robin Hood, a touring partner, and two weeks of training in Missoula, Mont. before she hits the road for a year</span>. She will teach children around the country a full musical in one week and perform it at week’s end. For the summer, she’ll be touring Ohio and Wisconsin, but from there she’s not sure where she’ll be.</span>

<p dir=”ltr”><span>Weldy herself began her theater career young, when she was 11-years-old. She auditioned at the Lancaster Opera House for the youth production of</span> <span>Annie</span><span>, cast as an unnamed orphan – but she was one of the youngest there, a third grade student among thespians primarily in the eighth grade. It was the audition and her personality that Weldy thinks set her apart, with thanks to her mom, Lynn.</span>

<p dir=”ltr”><span>“I was very nervous for my audition singing ‘Happy Birthday,’” she joked, “but my mom always encouraged me and said to me, ‘Bigger than life, Carly.’ So I went ham, and added stuff into the show like sticking my tongue out and making faces, and the director remembered me from there on.”</span>

<p dir=”ltr”><span>This “bigger than life” attitude that Weldy’s mother passed down has helped her win over many directors. As a freshman at Iroquois High School, she ultimately chose theater over beloved soccer, and it proved to be a wise decision.</span>

<p dir=”ltr”><span>“The character I was reading for has this breakdown on the table,” she said, “and other people (in auditions) were just reading the part…  I rolled around on the table and started crying, and I was the freshman who got the lead role in that play. I don’t mean to sound like I’m bragging – I’m very, very grateful for that and for everything.”</span>

<p dir=”ltr”><span>She went on to perform in several musicals and plays for Iroquois High School, graduated in 2014 and went to Niagara University where she earned her Bachelor of Fine Arts in Theater Performance with a minor in General Business and graduated this past month. A critical moment for Weldy was in high school in her role as a waitress in the musical</span> <span>Working</span><span>.</span>

<p dir=”ltr”><span>Before the musical, Weldy mentioned that her mom Lynn, a flight attendant, was skeptical about her daughter’s insistence that musical theater be her career.</span>

<p dir=”ltr”><span>“I really wanted to go for theater and my mom was like ‘No, your dad is a starving artist’ and I was like ‘Mom, this is what I’m really passionate about,’” said Weldy, speaking of her father Jim, who plays in a local band, Boys of Summer. “And then she saw me in that show and we just had a sob fest when we got home. She said ‘You can go chase your dreams,’ so I did. That was the real moment of ‘Yup, this is what I want to do.’”</span>

<p dir=”ltr”><span>Weldy moved on to Niagara University and took courses in speech, combat classes, theater history and also had time where she had to direct plays and learn about Shakespeare. It was an intense time. She also enjoyed the philosophy and religion requirements that rounded her out. “Theater is supposed to question humanity and think bigger than that, beg the question and answer the question and make you feel things,” she said.</span>

<p dir=”ltr”><span>Alongside these experiences, what prepared her most for her new job was Niagara’s Kids in Art program. For four weeks, each week a new group of children, ages ranging from 5 to 9, attend summer camp every day Monday through Friday on campus. On Monday, the counselors (Weldy’s position a few summers ago) sit down with the group and, based off of the week’s theme, write a script as a group of contributing members. By Thursday, the set must be made, costumes constructed, lines rehearsed, blocking coordinated, and on Friday the show goes up.</span>

<p dir=”ltr”><span>For Weldy, the creativity aspect was an interesting challenge.</span>

<p dir=”ltr”><span>“If the kids wanted a unicorn pooping cupcakes, they can have it,” she said with a laugh. “If they want a robot named José, that’s cool. If they want to make tacos at a campfire and the campfire eats the tacos, they can do that. It’s very difficult but it’s what prepared me for my job, because it’s so similar.”</span>

<p dir=”ltr”><span>The excitement for her new opportunity with the Missoula Children’s Theater stems from more than just performing and travelling for Weldy, who will take turns with her partner directing the show and performing in the show each week. The opportunity to work with children has always been a motivating factor in her career.</span>

<p dir=”ltr”><span>“Ever since then, that’s been my passion, to really pass that on, because there’s nothing that feels better than when you really change their lives.”</span>

<p dir=”ltr”><span>This opportunity means much to Weldy, who knows fellow actors whose lives have been affected by the Missoula Children’s Theater. She recalls peers from “cornfield towns” like her who pursued theater as a profession because of the company. “It brings theater to kids who don’t have it,” she said.</span>

<p dir=”ltr”><span>In the end, her dream is to own or direct a children’s company such as Missoula’s, teaching children through theater all that the art form has to offer.</span>

<p dir=”ltr”><span>“To me, theater is the best platform to remind people of their humanity,” she said. “It brings us back, it ground us, it’s one of the oldest forms of entertainment in history, and it’s such a wonderful tool for kids, especially underprivileged kids or kids who don’t have great role models. It teachers them communication, it teaches them how to read people, it teaches them etiquette, which is huge in theater. It teaches so much, and it makes the kids believe in themselves.”</span>

<p dir=”ltr”><span>“Be smart and do your research, visit those schools, but don’t be afraid to take risks,” she said.  “You can’t grow and be comfortable, it’s just not how that works. You can find joy in failing and not getting the roles or jobs you wanted or just going out on a limb, because who’s limiting you? No one. Find joy in that journey.”</span>